All 800 police officers and 300 administrative employees laid off, and navy deployed to patrol Gulf coast city 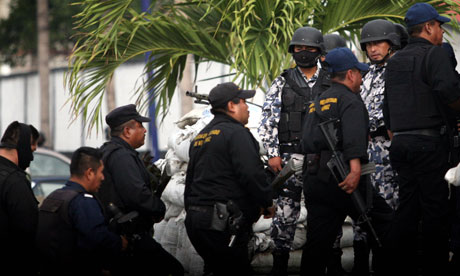 The entire police force in the Mexican port of Veracruz was dissolved on Wednesday in an effort to root out corruption, and armed marines were sent in to patrol.

A state spokeswoman, Gina Dominguez, said 800 police officers and 300 administrative staff had been laid off. They can re-apply for jobs, but must meet stricter standards with officers "who are better trained and more committed and who can deliver under our current security circumstances," she said.

Armed marines barricaded police headquarters and navy helicopters flew over the city where 35 bodies were dumped in September in one of the worst gang attacks of Mexico’s drug war.

The change was agreed on Monday by the governor of Veracruz, Javier Duarte, and the federal interior secretary Alejandro Poiré. Mexico’s army has taken over police operations several times before, , notably in the border city of Ciudad Juarez and the border state of Tamaulipas. But Veracruz is the first state to completely disband a large police department and use marines as law enforcers. There are about 2,400 marines in the state of Veracruz.

Dominguez said the navy operations will last only until the state can train more of its own police. Duarte already had disbanded a police force in the state’s capital of Xalapa, but in that case state agents immediately replaced city police.

President Felipe Calderon has pushed an amious process for vetting all of Mexico’s 460,000 police officers. His administration allocated $331m for 200 cities to train and re-equip municipal police forces. Governors have complained they lack the resources to ensure their police forces are clean.

Veracruz is a common route for drugs and migrants coming from the south. It was first dominated by the Gulf Cartel, and then its former armed wing, the Zetas, took over after the two split. The state saw a rise in crime this spring after a government offensive in neighboring Tamaulipas scared drug criminals away to Veracruz.

But the dumping of the 35 bodies shocked Mexico as it turned the port into a battleground between the Zetas and a gang aligned with the Sinaloa Cartel, led by Joaquin "El Chapo" Guzman.